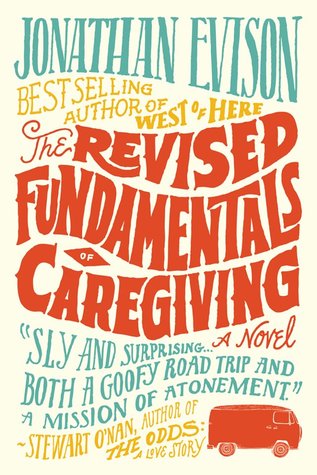 Benjamin Benjamin has lost virtually everything: his wife, his family, his home, his livelihood. With few options, Ben enrolls in a night class called The Fundamentals of Caregiving, where he is instructed in the art of inserting catheters and avoiding liability, about professionalism, and on how to keep physical and emotional distance between client and provider.

But when Ben is assigned to tyrannical nineteen-year-old Trevor, who is in the advanced stages of Duchenne muscular dystrophy, he soon discovers that the endless mnemonics and service plan checklists have done little to prepare him for the reality of caring for a fiercely stubborn, sexually frustrated adolescent with an ax to grind with the world at large.

Though begun with mutual misgivings, the relationship between Trev and Ben evolves into a close camaraderie, and the traditional boundaries between patient and caregiver begin to blur as they embark on a road trip to visit Trev’s ailing father. A series of must-see roadside attractions divert them into an impulsive adventure interrupted by one birth, two arrests, a freakish dust storm, and a six-hundred-mile cat-and-mouse pursuit by a mysterious brown Buick Skylark.

Bursting with energy, this big-hearted and inspired novel ponders life’s terrible surprises and the heart’s uncanny capacity to mend.

Before I had a baby, I would go to the library at least once every other week, usually more often.  I mostly read paper books, even though I have a Kindle, because that is the format almost every book I had to read right then came in.  Well, now that I have a baby, getting to the library is less of a priority and due dates are much more inconvenient than they used to be, so I decided to try to utilize the library’s collection of ebooks more.  This requires a lot of browsing through titles and covers and, to finally get to the point of this story, that is how I came across The Revised Fundamentals of Caregiving.  I had recently finished Me Before You and thought it would be interesting to try another story about a caregiver.

Ben’s life is virtually at a standstill after the deaths of his two children.  His wife leaves him and with the loss of his kids, he loses his occupation/identity as a stay-at-home dad.  He becomes a certified caregiver and lands himself a job as the caregiver for Trev, a young man with MD.  Ben is having trouble moving forward with his life, but he and Trev strike up a friendship which culminates in a road trip across the Northwestern US.

While the summary of this book would have you believe that this is the story of an unusual friendship, it is more a story about Ben’s journey of grief and healing.  Not a bad thing, just not what I was really expecting.  Ben’s life is a bit of a country song (as he even says at some point)– he loses his wife, his kids, his job, his family, and I’m sure if he had a dog and a truck, he would have lost those, too.  I know that trying to move on after the death of his children is not an easy journey, but Ben acts a bit irrational, reckless, and just plain weird sometimes.  At the same time, though, he really is a caregiver in every sense of the word, one of those people who tends to tend to others’ problems before his own– often to his own detriment.

One plot device I really do not enjoy is when we are told a character has died, but then there is an attempt to build up suspense about the nature of that death.  Evison does that in this book with the deaths of Ben’s children and it just feels anticlimactic and a bit clumsy.  We know they are dead, we are told early on it is because of some accident on Ben’s watch, it really isn’t suspenseful or all that interesting to have intermittent flashbacks to the accident.  (Another book that had a similar tack was Simply from Scratch, in case you care to know where I’m getting that this is a thing that authors do.)

Another thing that bugged me is that Trev and Ben bond by going to the food court and ranking the women they see, specifically mentioning what sex act they’d do to each girl.  I think Ben even knowingly refers to it as objectifying women and I know it is likely realistic, but it still made me uncomfortable to see male-bonding-through-misogyny.

This is a book I had a hard time rating.  It is well-written and Ben is a well-developed character.  I just don’t know that I really liked the book a whole lot, though I am far from actively hating it.  Between the anticlimactic accident flashbacks, the “I’d slip it to her” remarks, and the often depressing atmosphere hanging over the book, I just can’t say this was a book I enjoyed.  That said, this book was not without its charms, I just am not sure I am the right reader for it.

2 thoughts on “The Revised Fundamentals of Caregiving- Jonathan Evison”