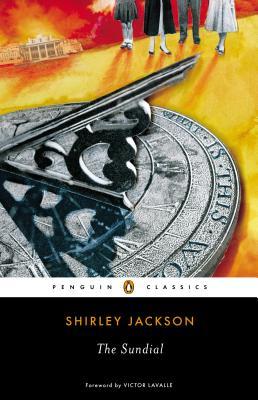 The Halloran family lives in a grand house surrounded by elaborate gardens surrounded by a stone wall.  Lionel Halloran has just died (possibly pushed down the stairs by his own mother, nonetheless) and the family is at a bit of a turning point.  Aunt Fanny goes for a walk in the gardens and receives a message from her long-dead father that the world is about to end, but he will protect those who remain in the Halloran house from destruction.  Aunt Fanny tells the others and they all readily accept that they will be the sole survivors of the coming apocalypse.  The Hallorans and a series of guests begin to make preparations for the strange new world they will soon inhabit.

Oh lordy, this is a weird book, but I love Shirley Jackson and this book was no exception.  There is a great blend of absurdism, horror, and wry humor in this book.  The characters’ preparations for the coming apocalypse range from ordering a crown to wear as queen of the new world to burning all the books in the library to make room for all the canned goods and first aid kits they ordered to throwing a party for all the villagers to celebrate their last day on Earth.  There are several nightmare-like scenes, which are absolutely brilliant horror writing.  You know those dreams where you are talking, but no one can hear or trying to run, but can’t?  Shirley Jackson was able to recreate that same feeling within those scenes and it’s sneak-up-on-you terrifying.  These nightmare-like scenes are probably my favorite of her horror writing.

The characters’ preoccupation with the end-of-the-world seems to serve to keep them busy.  They are rich and have nothing better to do than to keep themselves busy with their imagined crisis.  They also can avoid thinking of the unpleasant facts of their lives this way, particularly the fact that Mrs. Halloran seems bent on ousting anyone with claim to the Halloran estate.  Their ready acceptance of Aunt Fanny’s predictions also seems to stem from a shared desire by the characters to be rid of other people and create their own perfect world.  Mrs. Halloran plans early on to rid the house of everyone she can and, while that plan doesn’t come to fruition and more people keep getting added to the house, the end of the world seems to be a way for these already isolated people to isolate themselves even further.

There are elements in this book that strongly call back to other Shirley Jackson works and it made this book feel almost like the precursor to her greater works (it was in fact published before The Haunting of Hill House and We Have Always Lived in the Castle, so I guess this is probable).  I wouldn’t recommend you pick this as your first Shirley Jackson book (start with We Have Always Lived in the Castle), but if you like Jackson’s subtle horror, creepy houses, and slightly-off characters, this is definitely worth checking out.

5 thoughts on “The Sundial- Shirley Jackson”