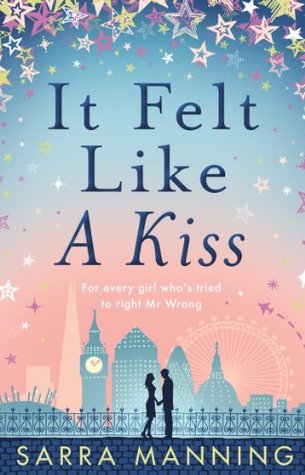 Ellie Cohen has got her act together.  She’s successful in her work at an art gallery, has a very close relationship with her mother and grandparents, and has strong friendships with her roommates.  But Ellie is terrible at choosing men, always ending up with “lame duck” boyfriends who aren’t near as put together as she is (as in they are often alcoholics or unemployed or both).  One such lame duck, Richey, is kicked to the curb after he humiliates her at Glastonbury by going on a cocaine binge (again) and generally being awful.  Richey takes his revenge on Ellie by selling the story of her father to the tabloids.  You see, Ellie’s father is the incredibly famous (and married) rock star, Billy Kay.  Suddenly, Ellie is being followed around by cameras and reporters and unflattering pictures of her in bikinis are on the front pages of all the gossip rags.  Billy Kay’s lawyer, David Gold, is assigned to manage the Ellie crisis and things get even more complicated for Ellie.

She and David have met before, at Glastonbury, where their chemistry and attraction to one another is instant, but interrupted by crazy Richey.  David doesn’t trust Ellie to not leak her story to the press and Ellie is desperate for a little privacy, so David decides to offer his flat as a hiding place for Ellie.  Being in close quarters with one another is difficult, as they cannot deny their mutual attraction, but neither one trusts the other’s motives.  Ellie and David are both perfect on the surface, but emotionally damaged and have to get past their prejudices about one another and their emotional hang-ups to get together.

I adored Sarra Manning’s Unsticky and this gave me much the same feelings as Unsticky did.  These characters are flawed and emotionally scarred.  Ellie tries to get everyone to like her and suffers some uncertainty about herself because of her absent father.  David compartmentalizes his feelings and is pretty closed-off, mostly to cover any sense of immorality and wrong-doing he might feel as a result of his career as a cut-throat entertainment lawyer.  Their chemistry with one another is intense and goes against their best interests, but fighting it doesn’t work for long.

Although I have mostly been talking about the romantic plotline, there is a lot more to this story than just romance.  Ellie is faced with intense public scrutiny of all areas of her life and is surprisingly strong in the face of a really crappy situation.  She learns that she cannot control how other people perceive her; she may be made out to be a “tart” by the tabs, but she is able to win over David’s parents or the audience of a talk show by being herself.  So what if not everyone loves her or believes her to be perfect?  In addition to the character development, we get short flashbacks to Ellie’s mother, Ari’s, affair with Billy Kay.  These probably weren’t necessary to the story, but I thought they were interesting and they definitely cleared up any questions about Billy’s role in Ellie’s life (she is so0000o better off without him).  Ellie’s family relationships were also really nicely portrayed.  She may have the worst father in the world, but her life is filled with people who genuinely love her and that was nice to see.

I had two big complaints with this book.  First, there is a completely out-of-place don’t-worry-about-the-condom-I’m-on-the-pill conversation, which definitely dampened a decent sex scene.  It felt out of character and unnecessary and I’ll leave it at that.  We all know that is a stupid romance genre convention that needs to die.

My second complaint is the ending didn’t really work for me.  Ellie tells David he has to change for her to accept him.  He can’t continue to compartmentalize and he can’t continue to work on her father’s behalf while in a relationship with her.  Ellie is right to make these demands and stand up for herself.  Their relationship would not work with David still representing Billy Kay’s interests.  But David is described as being very career-oriented and very concerned about climbing the ladder in his law firm.  For him to give up his career without a back-up plan to be with Ellie seemed far-fetched and character-breaking.  It was the most convenient route to a Happily Ever After, but that made it seem like even more of a cop out.  One thing I really liked about Unsticky was that the characters are a better version of themselves when they are together, but they do not suddenly become perfect people because of one another.  Vaughan, who appears in It Felt Like A Kiss as Ellie’s boss, still remains prickly and moody and demanding and unreasonable a lot of the time.  There really needed to be a solution to the David-Ellie problem that allowed David to stay David.  I don’t know what that is, but in absence of a better solution, the two needed to not end up together.  I know, I’m rooting for the couple in a romance to not get together.  I don’t think the ending was a total deal-breaker for me, but it kept this book from hitting the 5-star territory it was headed towards before the last 15% or so.

In any case, this was still a good book with a lot of depth and difficult, complex characters.  I am really liking what I have seen in terms of British chick lit lately (see also You Had Me At Hello); a lot of heroines growing as people and finding love along the way and a lot less of the angsting and silliness that chick lit is known for.  There may be brand name clothes in these books, but the characters don’t max their credit cards out for them and if they do, it has real repercussions.  If you haven’t given some of the recent British chick lit a try, this is not a bad one to start with.  I think it has more likeable characters and less moral gray area than Unsticky, but still maintains the emotional depth and character development that I liked so much from Sarra Manning’s other hit.

One thought on “It Felt Like A Kiss- Sarra Manning”