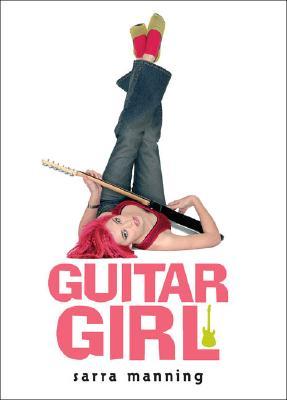 It’s no secret that I looooooooooove Sarra Manning.  I’ve read most of her adult books, but hadn’t tried her YA stuff.  That is, until I came across Guitar Girl at my library’s book sale.  I figured I would give it a shot, even though the cover and description make it sound like fluffy YA of the sort I don’t normally read.

Molly and her friends start a band on a lark.  They want something to make them stand out in a crowd.  So they start The Hormones and quickly add a couple of guys to their band and before you know it they’ve made it big.  But fame is hard and takes its toll on Molly and her friends.

I enjoyed this book.  While the plot is well-trodden ground (fame isn’t all it’s cut out to be), I liked this more than other fame books I’ve read (namely Between You and Me).  The tone was much darker than I expected from a book with pink lettering on the cover, but that was actually a good thing.  Molly was an interesting and flawed character going through her late adolescence under a microscope.  I always like the introspection and emotional growth of Sarra Manning’s main characters and Molly felt very much in the vein of Grace or Neve or Ellie– insecure, imperfect, but really likeable.

I have also noticed that Sarra Manning’s male characters are not really nice guys.  In Guitar Girl, none of the male characters were appealing.  Like at all.  Which was ok, because Molly is a teen and bound to make dumb romantic decisions, but geez.  The men were just awful in this book.

One great thing in Guitar Girl was a very honest look at the issue of sex and teens and teen idols.  Molly’s sex life (or lack thereof) is big news.  She is expected to be both a virgin and a sex symbol.  It was reminiscent of Britney Spears.  It was just a really frank discussion of teen girls and sex, which is always refreshing to see in YA.

Anyways, this was a quick, addicting read (like all of Manning’s books have been for me) and just reaffirmed my love for Manning’s work.  I am a huge fan and will certainly be trying read as many of her adult and YA books as I can get my hands on.