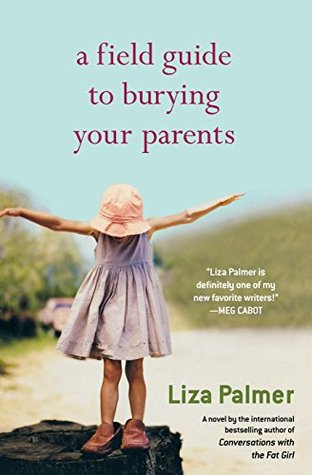 I’m going to develop a reputation for not liking Liza Palmer’s books, but I swear that’s not true.  I really did enjoy the first two of her books that I tried.  (Proof 1 and Proof 2)  But I guess pushing that proof aside, I really did not like A Field Guide to Burying Your Parents.

Alright, so the premise of this story is Grace is from this super tight-knit family with four kids, an estranged father, and a really awesome mother.  Grace’s mother died five years prior to this story started and Grace hasn’t spoken to her siblings since her mother’s funeral.  She has isolated herself in this little bubble of numbness, hiding from the intensity of her grief.  Then, one day, Grace’s sister calls to tell Grace their father has had a stroke and has made their older brother his power of attorney.  Grace sucks it up and out of a feeling of obligation to be a good child like she thinks her mother would have wanted her to be, drives up to see her father and her siblings gathered at his bedside.  It soon becomes clear that Grace’s father is dying and there is a big scuff-up because a lady claiming to be his wife keeps turning up, making it incredibly puzzling why their father left his power of attorney to a son he hasn’t seen in 20 years.  Amid the legal issues this precipitates, Grace is left with trying to process her grief for her mother, resolve her feelings about her father who abandoned her, get back in the good graces of her siblings and nieces/nephew, and reconnect with the boyfriend (who is also older brother’s partner at their law firm) who she abandoned when she deserted her family five years earlier.

There were parts of this story that worked for me, particularly the sibling relationships.  It felt like a very real reunion between these four very close siblings, with some anger and resentment from her sister, total acceptance from her younger brother, and some tough love from her older brother.  In the face of some really trying circumstances, they band together to make sure their father’s dying wishes are complied with.  I also enjoyed the plot antics in terms of the second wife and legal rights and inheritance and all that.  It was an original and interesting plot for a chick lit book and was actually a cohesive plot (unlike that of Girl Before a Mirror).  Also, Palmer’s writing is very readable and this book was no exception.

But there were parts of this book that did remind me of my dissatisfaction with Girl Before a Mirror.  Mainly the romance and character development in this book felt forced, much like they did to me in GBAM.  Grace’s grief bubble dissolves in the blink of an eye.  That sort of sudden character change doesn’t feel authentic and is kind of confusing.  In addition, the romance in this book lacked the establishment of a real connection between John and Grace.  It’s mostly told in flashbacks, but the on-screen, real-time romance we get is no real discussion or resolution of the five years separating these two, but rather just some sex and quick forgiveness and I love yous and never ever leave agains.  And that was also much the same way that the resolution of relationships went for Grace between her and her siblings and between her and her father.  It was all quick and easy forgiveness, and while I was willing to buy that Grace and her siblings could put aside the past to work together on their father’s behalf (after all, that’s what families do), I had a hard time buying that her ex-boyfriend whom she abandoned and the father who abandoned her would result in such easy resolutions.

Also, I wasn’t particularly happy with the ending of this book.  The epilogue was gag-me-with-a-spoon cheesy (seriously, why do authors think the surprise pregnancy is a cute, romantic thing?  WHY?) and for a story with a lot of people in heartaching situations, everything ended up a bit too rosy.  A story about a father who abandons his children and then calls them to his deathbed 20 years later could have much more depth and emotion than this story managed to.  This was all a little more fluffy and happily ever after than you might imagine based on the plot description.

And I think that brings me to the big thing that has been bugging me in Palmer’s books– she chooses very big issues to discuss in her books (the death penalty, school shootings, the death of one’s parents, sexism in advertising) and instead of digging deep, still manages to turn out a story that is rather fluffy without any major examination of those big issues.  I think that’s why Seeing Me Naked and Nowhere But Home worked for me– they were mostly about the family and personal drama.  The death penalty could have been a big issue in the latter, but plot-wise it wasn’t necessary, so it didn’t work against the overall development of the characters.  And I think this is also is why A Field Guide for Burying Your Parents fell so flat for me– it promises to deal with the grief of losing both parents through death and abandonment, but ends up settling for an easy out with a father who always loved his kids and ex-wife, but could never ask for forgiveness and come back to them and made grieving a mother as simple as not talking about it for five years and then having a mini-breakdown in a parking lot.

I only have one of Liza Palmer’s books left to read and I’m honestly not sure if I will or not.  It is her debut and should be closer in tone to Seeing Me Naked.  But I have had such mixed results with her books, that I have a hard time imagining giving them another try with the failures so fresh in my memory (Girl Before a Mirror was such a major disappointment for me).  In any case, it has been interesting to be working on authors’ backlists this year (kind of unintentionally) and to see that sometimes an author who really works for me in one book doesn’t at all in another.  Has this ever happened to you?