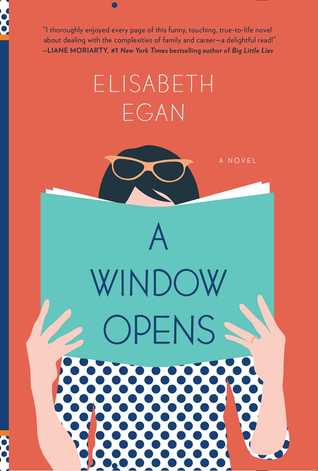 Alice is a married mother of three in her late 30s, living in the New Jersey suburbs of NYC.  She works part-time at a women’s magazine writing the column on book recommendations and this gives her a nice balance between being present with her children, taking time for herself (spinning class! book club! wine with friends!), and remaining active in the career force.  But then, her husband, Nicholas, loses his job as a high-powered corporate attorney and decides to go into practice for himself.  In the meantime, Alice decides to take on a full-time job to support her family while Nicholas’s business gets off the ground.  She finds a well-paying job with Scroll, the latest innovation in bookstores.  Alice thinks she’ll be curating a collection of ebooks for customers to choose from in Scroll’s luxurious reading lounges, complete with free trade coffee and organic snacks.  But Alice is actually entering the retail world where customer demand and the dollar are the bottom lines.  Her job offers very little flexibility, includes a 90 minute one-way commute, and requires Alice to be hooked up to email and her phone all the time.  At first, she is thrilled to be taking on this new challenge, but real life soon gets in the way.  Her kids are handling things alright, but she is never quite satisfied to be spending so little time with them.  Her husband begins drinking more and more.  And on top of all that, her father’s cancer has returned and is not responding to radiation.  Alice tries to make her new job work alongside the personal interruptions, but she eventually finds that she is being made miserable trying to “have it all” and that the job she has put her life on the line for is making her miserable.

This is a very “ordinary life” sort of story– Alice deals with work details and raising a family and taking care of aging parents. I liked that and I liked Alice. She’s navigating through a lot of new things, but seems to remain down-to-earth and just… I dunno, seems like the kind of person I’d want to chat books or kids with. I like that Alice is thrown into the deep end with her new job and that she tries to make it work and is capable of doing work that is probably outside of her depth of experience when she comes in. There is some of the excitement of a new business venture in here and that is entertaining (until things take a dramatic turn that ruins the whole deal for Alice). I’m always down for stories about women finding themselves and making life work for them and this was no exception.

But there were three big things that bugged me about this story.  First, Alice’s husband’s drinking issue is never really tackled in a meaningful way.  He’s been getting black-out drunk in the afternoons for about a year and manages to turn this around just by wanting to quit?  To me, it sounded like he had addiction issues, which are unlikely to be solved by force of will.  I kind of feel this story would have worked without a drunk husband, so Egan needed to deal with this in a real way or leave it out.

Second, I’m a little uncertain how to take the ending of this story, where Alice figures out Scroll is not for her. It was the ending I was rooting for and absolutely appropriate for Alice’s situation, but I am kind of left hanging. I’m a working mom (granted in a more family-friendly environment) and it almost feels like a slap in the face to read a book about a working mom whose problems are all solved by her quitting her job and letting her husband’s business take the lead. I don’t know. Not every working mom has the luxury of quitting her well-paying job to “figure things out.” I think I’d have been more satisfied if this had ended with Alice finding a full-time job that gave her more flexibility to be present with her family, rather than having her return to part-time work and the vague possibility of a future business venture.  I just felt very uncomfortable about reading a book about “having it all” that settles firmly into the message that it can’t be done.  And sure, I think “having it all” is a problematic concept and that there is no realistic way to do everything you want in life (even without kids), but I think many mothers manage to find a balance they can live with, even with a full-time job.  It just really bugs me that Alice’s solution had to be exiting the traditional workforce, especially when all her children are in school full days.

Finally, I think a lot of my dislike about the ending of this book has to do with my discomfort with the socioeconomic background of the characters in this book. I just felt vaguely unsettled that money is never a REAL problem for Alice, that she can afford the babysitter, the house with the perfect location, the new work wardrobe, the lessons and activities for the kids, etc. without breaking a sweat. She lives in a rarefied world (one where she inherits money from her father’s death, even)– not the world most of us would find ourselves in if our partners lost their jobs and went into business for themselves.  I always feel a little uncomfortable with these stories of women for whom money is no big deal, particularly ones that strive for as much realism as this one did.

Anyways, despite the fact that had some rather major issues with this book, I did enjoy it quite a bit.  I think Alice’s character won me over and that that made this book a lot more charming than it would have been had these issues been present in the story of a flatter character.  I’d definitely be willing to try more from this author, should she write another novel.  As for a recommendation, if Jennifer Close is your kind of chick lit, then I think Elisabeth Egan would be, too.  This is definitely for fans of that higher brow sort of chick lit– the kind with heavier issues and East Coast, privileged characters, where the drama of daily life outweighs romance or comedy.