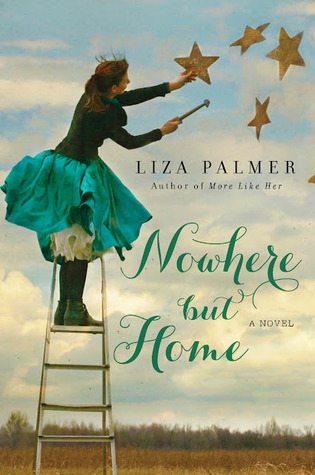 Queen Elizabeth “Queenie” Wake grew up in small town, North Star, Texas, the daughter of the town tramp, who was killed when she was caught sleeping with her best friend’s husband.  Needless to say, the Wakes have been the subject of town gossip and ridicule for a long time.  Ever since Queenie reached adulthood, she has been running from her hometown and her past, taking (and losing) kitchen jobs all across the country.  After a particularly brutal firing in New York City, Queenie decides to make her first visit back to North Star in the past decade to see her sister and nephew.  Queenie takes an opportunity to cook last meals for death-row prisoners at a local prison and starts to consider sticking around.  She loves her sister, her nephew, cooking in her own kitchen, and is starting to get a little closure about her past.

There is one thing that Queenie can’t seem to get past, though, and that is Everett Coburn.  The Coburns are one of North Star’s elite families.  Queenie and Everett had a “secret” relationship all through high school and college, which ended abruptly when Everett decided to marry the girl his parents picked for him.  Even after all this time, Queenie still loves Everett and it seems Everett returns her affections.  But both are afraid to make their relationship public and face the criticism of the town.

I really enjoyed Liza Palmer’s Seeing Me Naked, and Nowhere But Home was also enjoyable, though a little more problematic.  I enjoyed the small town Texas setting, especially because it wasn’t particularly romanticized.  I also liked the seriousness of Queenie’s issues and her courageousness to try something a little weird to work through her issues.  Queenie’s willingness to be herself, even if it’s different, even if it makes her fodder for the town gossips, was good to see.  I have said it before, but I really like seeing young adult women deciding they deserve to be happy and then going after it.  In that respect, this book was yet another excellent chick lit pick.

I did have a few quibbles with this book.  Number one on this list is the love interest, Everett.  He was hardly in this book, except in flashbacks, and he spent most of his youth being ashamed of his feelings for Queenie.  The two haven’t seen each other in 10 years and yet pick up right where they left off.  I just… can’t believe that.  There is so much baggage and so many years between these two, I needed a little more from this romantic plotline to believe it.  Also, capital punishment is a big issue in this book, but it is sort of glossed over.  I know it’s Texas and Texas executes more people than any other state, but really?  Everyone in this book just accepts capital punishment as good and right, even though the details make them squeamish.  I know this is chick lit, but I would think if you’re going to bring up a hot button issue like capital punishment you’d make the discussion a little more nuanced.  And finally, I think the ending here was, like Seeing Me Naked, a little too tidy and a little too happily ever after.  Palmer seems to want to leave every single character a little happier than when she started… and well, that’s not life.

All that said, I will probably read more Liza Palmer in the future.  Even with the flaws in her books, I still find them fun, yet intelligent stories of women making their lives better and creating their own happiness.  If you like smart chick lit, definitely give her books a try.