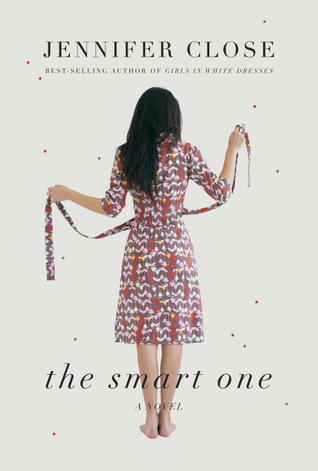 The Smart One is told in alternating points of view from four women in the Coffey family.  Weezy is the matriarch, whose empty nest doesn’t stay empty and who is a bit of a control freak.  Martha is Weezy’s oldest daughter. She is socially inept, works a dead end job at J. Crew, lives at home with her parents, is very into her weekly therapy sessions, and seems hopelessly incapable of ever becoming independent.  Claire, Weezy’s younger daughter, is the “normal” one, but has just broken off her engagement and finds she can’t make ends meet in New York City on her own.  She moves back home, but her fierce independent streak clashes with her mother’s need to control everything.  Finally, we have Cleo, the girlfriend of Weezy’s youngest child, Max.  Cleo is a beautiful young college student who doesn’t ever feel like she fits in anywhere she goes and can’t seem to follow societal conventions or relationship rules.  Cleo and Max move back in with Weezy, too, after they graduate from college.  This is an interesting look at family dynamics when adult children return to their parents’ home and at the lives of four women at personal crossroads in their lives.

What I liked: I picked up this book at the Strand when I was in New York visiting my sister.  I was eager to read more of Jennifer Close’s work after finishing Girls in White Dresses, which felt like a fresh, smart take on chick lit.  I was equally impressed with Close’s writing in this book.  I like her focus on the ordinary everyday events in life and I appreciate her ability to create characters who felt real and distinct.  Close also has a real understanding of relationship dynamics and that is very evident her in a story about the complexity of family relationships.  I also liked that this book focused on adults returning home, as that experience is becoming especially common these days.  I haven’t had to move back home, but I imagine that I would feel as frustrated as Claire did at the loss of independence.

What I felt meh about: While I appreciated that the characters in this book felt realistic and flawed, sometimes they felt too difficult.  It got to be a bit grating at times to read about Weezy constantly underestimating her children and her husband and trying to run everyone’s lives or about Martha complaining about everything and never taking control of her own life.  This also felt like a very WASPy, upper middle class story, which isn’t a flaw exactly, it just made the story less appealing to me.  Finally, some of the characters’ attitudes towards things like homosexuality, premarital sex, cohabitation, and unplanned pregnancy seemed out-of-place and old-fashioned for the characters that held the beliefs.  For example, Cleo is 21 and embarrassed about living with her boyfriend during college because that’s just not a thing girls her age do.  Moving in with a significant other during college was fairly common for people I knew when I went to college 10 years prior to the publication of this book, so that attitude seemed particularly strange.

All in all: While this book was not a personal favorite, I have no intentions of writing off Jennifer Close.  I really enjoy her writing and her sharp observations of people and personal relationships.  There is a lot of potential in her writing and I look forward to seeing what she comes up with next.