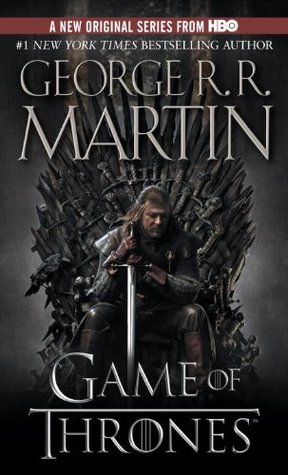 Sigh.  This has to be the most disappointed I have been after finishing a book in a really long time.  I thought I had learned my lesson about reading books just because I liked the TV show they were based on, but no, no, apparently not.

I don’t even know how to describe the plot of this book because it is so wide and expansive and spoilers abound.  So, there is a kingdom called The Seven Kingdoms/Westeros and it is medievalish and fantastical.  Lord Eddard Stark is an old war buddy of King Robert Baratheon and gets appointed to be the King’s Hand (his right hand man) and then there is some political intrigue and scandal in terms the rightful heir to the Iron Throne.  This eventually ends in civil war as all sorts of people engage in this “game of thrones,” but all the while there are threats to Westeros building up from way up North and way across the sea.  And it is told from many points of view in the third person, so you get to take a glimpse of the action from all sides.

I unabashedly love the HBO show, Game of Thrones.  Can’t wait for it to come back.  This book, however, was terrible.  The show hews pretty closely to the book, so I have to say that the idea of the story is good and full of potential.  The writing is just so bad and so unsophisticated that the execution of the story utterly fails.  This story (as written) NEEDS actors to give life and dimension to the characters.  It NEEDS costumes and set design to make the setting vivid.  It NEEDS screenwriters, editors,  and actors who can transform clunky dialogue into natural conversations.  It NEEDS visual images to provide a little subtlety to Martin’s bang-you-over-the-head symbolism and foreshadowing.

One of the more major execution problem with this story was scope.  I remain unconvinced that there is a book that needs to be over 500 pages.  Yes, it is (kind of) awesome to see a story from all angles, but it does not work well in this book.  If Martin had narrowed the focus here to just what was going on with the Iron Throne, without diverting attention to Jon Snow or Dany, I think the plot would have been more focused.  Or at least, I could have slogged through 600 pages of crap writing instead of 800.  Jon Snow and Dany have interesting stories, but it would have been more appropriate to focus a separate volume on those conflicts, not introduce them early on when the fighting is still at home.  You can foreshadow that trouble brews from afar in much more subtle way that having us follow along on every detail of Jon or Dany’s lives.

I’m also not sure how in the gigantic scope that Martin takes on, there is not one romantic storyline.  I don’t think every book needs a romantic subplot, but this one needed it to balance out all the war/beheading/dead guys walking around.  Maybe Dany and Khal Drago were supposed to be that romantic counterbalance, but umm, I did not buy that relationship.  It is problematic that Dany’s empowerment and equality and happiness in her relationship are established through her enjoying sex.  I am all for female characters enjoying sex, but good sex doesn’t equal love.  But I suppose if the characters fall flat, so will their relationships.

I don’t think I have the stamina, patience, or masochism to finish the rest of this series (although I did buy the Kindle bundle, so I own all 5, lucky me).  I wouldn’t recommend this book, unless maybe you are really patient with long books with a huge scope, are a diehard fantasy lover, are someone who has to read what everyone else is talking about, and are not picky about writing.  Don’t say I didn’t warn you.  If you are at all interested in the story or the characters, watch the show.  It’s available for paid streaming on Amazon and on DVD, where ever DVDs are rented/sold and is totally worth the money.

8 thoughts on “A Game of Thrones- George R.R. Martin”