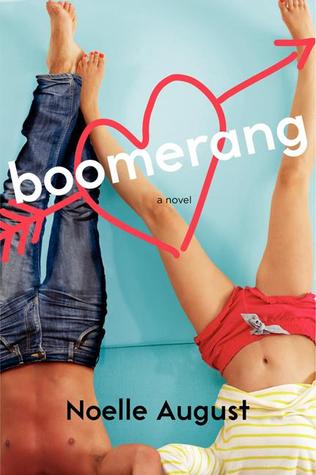 Mia and Ethan get hired on to be interns at the newest endeavor of a young tech multimillionaire, a dating website for casual encounters called Boomerang.  The catch is only one will get a full-time paid job offer at the end of the summer.  Mia is a film student and daughter of a very famous photographer.  Mia (confusingly) needs this job to get an in with the media mogul in hopes that he’ll fund her pet project, a film about her grandmother who is slowly dying from dementia.  Ethan is a recent college graduate with vague notions of law school on his mind.  Basically he needs the job because he’s broke.  But the cut-throat competition for the job is complicated by the fact that Mia and Ethan are REALLY attracted to one another and have already had a one-night stand prior to starting the job.  And it’s against Boomerang company policy to date coworkers.  And the Boomerang CEO likes to send his unpaid interns on dates to test out the service.

This was a fun, better-than-average romance, but not really the most amazing thing I’ve ever read.  The better-than-average part was the characters.  Mia and Ethan were both interesting and well-drawn, with their own insecurities about the future and their romance and all that young adult stuff.  What was enh for me was that this hit on a lot of romance genre tropes: every last character is going to find the love of their life by the end of this series, people making serious money in ridiculous career fields, a silly and arbitrarily constructed obstacle to the relationship.  While all of that is fun and par for the course in romance, I think had this been toned down and made more realistic, with its great characters it could have been OMG AWESOME.

That said, I’ll probably read the other books in the series when they come out.  I like New Adult romance a lot more than I do Young Adult romance and I think these authors (Noelle August is pseudonym for two people) will create characters that wow me enough to keep going.